Life continues to amaze and inspire me. The way one phone call, one conversation, one word, one smile or a seemingly random encounter can put together a stream of events that fall perfectly into place. Incredible, isn’t it? The way life works sometimes…it’s like the universe (or God!) is winking at you and saying: Just follow my lead.

I wrote today. A lot. I felt really great about it, actually. My day was spent going from one appointment to the next with a few minutes in between that I spent scribbling away in my notebook trying to make sense of my thoughts and organize them in a way that can be understood and flow nicely. I scratched out lines and wrote in the margins and crossed out a paragraph and skipped to a new page. It was a wonderful way to spend the time in between appointments and it felt productive…and wonderful.

I came home in the late afternoon after traveling around town for these appointments, which included radiation treatment number 3. I walked in and sat down to enjoy a bit more time to write…and then it hit me. Tired. Oh, so tired. My whole body suddenly felt exhausted. I decided to lay down and nap, which I did for a quick 30 minutes. I know radiation causes fatigue but I didn’t anticipate that it would happen so quickly. And maybe it didn’t, maybe I am just over tired and the running around to appointments today got the better of me. But my goodness, I am tired. It was a reminder to me that my body is still healing and still fighting. And sometimes it needs a break.

So, although I feel good about the writing that I did today, the rest will have to wait until tomorrow. For now, I will rest.

As I prepare for day 2 of radiation, I thought I’d share a few fun facts about what I can / cannot do for the next 6+ weeks:

Yeesh! I know it’ll be worth it but my goodness that’s a lot to remember. I keep hoping chemo fog will eventually get better…I suppose testing my memory with a list like this helps! J

I take back what I said yesterday about the hardest part of the radiation prep process being the removal of the stickers. The hardest part was actually scrubbing off all of that marker. Ouch! I still had faint lines all over my chest when I arrived for radiation today….and then had more drawn! The technicians needed to take more films of my radiation area, particularly around my clavicle today so that’s why there were more lines drawn. Additional lines were also drawn to line up where the technicians would place the bolus, which is used to help radiate more (for me) (google it, it’s so weird looking).

This additional films took a little time; I was moved around and repositioned a bit and then we were ready to start. If I had to guess, the total amount of time that I was actually being radiated was….maybe 3 minutes? I had to hold my breath a total of 5 times, one time for only 3 seconds and the remaining between 17 – 23 seconds based on my counts. The radiation machine moved around my body to align the beams to the area being treated. It’s interesting because when the machine is over my head, I can see the lead parts inside of the machine move. The entire area of the beam is pretty large and is perfectly square, maybe about the size of a 10×10 inch tile. The lead parts (I don’t know what they are actually called) inside move around and form the exact shape that is being radiated on my chest. So I don’t receive the entire square of the radiation beam, just the area that the lead parts form. Neat, huh?

The technicians are in a room off to the side but they can see me through a window & cameras and can also hear me throughout the entire treatment. When they tell me to hold my breath, they can tell whether or not I am breathing in too much or too little based on the way the beams align to the marks on me.

As I laid on the table, receiving my first dose, I thought about how amazing this process is. It doesn’t hurt at all (right now, that will likely change in the coming weeks) and yet I know it is destroying me inside, for the purpose of helping to keep the cancer away. It is such a pretty red light that can do such incredible damage.

Next, I saw the radiation oncologist (who I’ll see every Tuesday throughout this process) and we talked again about the side effects of treatment and what to expect. I asked a lot of questions to help refresh my memory based on the notes that I had taken. I asked if she had a preference of the lotion to use, since there were about 6 listed on the sheet. She suggested a product called Miaderm, which is pricey but works best, mixed with a few drops of Calendula Oil twice a day. Since I am so fair skinned, I can expect to have a pretty decent reaction so I opted to try the better stuff in the hopes of helping alleviate some of the redness / burning. Here’s hoping!

I asked about the fatigue, which shouldn’t be as bad as it was during chemo but she did indicate that people my age tend to feel the fatigue much worse. Let’s hope it isn’t too bad.

After all that fun, I headed to my checkup with the oncologist. I had lots of questions as usual and he helped answer them all. My blood work looks great and he believes (or has no reason not to believe) that once my body is fully healed from all of these treatments, that I will move on and be completely healthy. I can’t express how good it felt to hear that.

So, day one done. Only 29 more to go! Actually, maybe less. I learned today that I will have 25 “normal” rounds of radiation and then 5 “booster” rounds that will target the scar tissue around that area. Scar tissue is where cancer tends to return so she plans to booster the radiation during the last week. However, the entire 5 days may or may not be necessary…it all depends on how my body reacts and the amount of scar tissue. Hopefully I won’t need all 5!

I’m going to attempt to remove this marker again…anyone have a good trick?! The rubbing alcohol and makeup removing wipes are not working wonders yet… 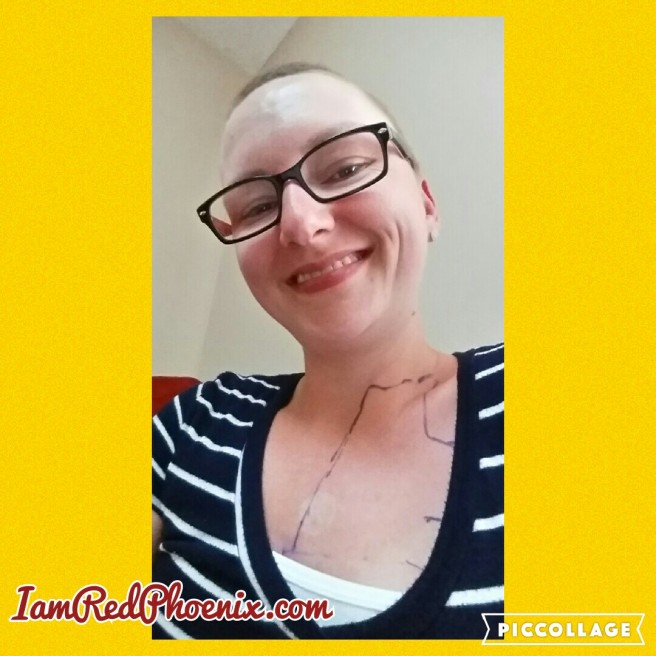 When I first came home after being marked for radiation, Jacob immediately noticed the one line that was visible on my chest. He pointed to it and stared at me questioning its sudden appearance. I responded by telling him it was a line on my chest. His face lit up as he touched it and said, “Roar!” I laughed and corrected him, telling him it was a l-i-n-e, line not an l-i-o-n, lion. He smiled even bigger, touched the line again and responded with another “Roar!” I decided I wasn’t going to correct him this time and instead smiled and roared right along with him. For the last 2+ weeks, anytime he noticed the line again, he would touch it and roar. This has made me smile over and over again as I continued to roar along with him.

Today, I went for my final radiation dry-run prior to beginning officially tomorrow. It was a lengthy appointment where I laid on the table just as I will for radiation and the technicians took films, as they called it. The films are basically x-rays that are taken of the area being treated so that they have an additional check in case the tattoos shift slightly over time. The technicians moved me all around on the table as the machine spun around me. I held my breath over and over again to ensure the measurements were perfect and that I was consistent with each breath hold. Towards the end, the radiation oncologist came in, checked all of the films and checked my positioning on the table and the machine. She agreed that everything looked perfect, had me practice my breath hold for her and left. The technicians then drew lines all around the area that is being treated so that they could photograph the area for documentation. Those are the lines you can see on my chest in the picture. It’s interesting to see how much of my chest that they are actually radiating. The radiation area goes across my armpit, down my left side, all the way down to just before my rib cage ends.

The final part was receiving my tattoos. I received 4 total tattoos: 1 on my left side, 1 on my right side, 1 on my chest almost directly opposite of my port and one under my expander, about halfway down my rib cage. They will be used to help guide me and the machine into place each day. For the tattoos, the technician put black ink around each of the 4 areas that would receive tattoos and then stuck a needle in. It only stung for a moment on three of the areas and the tattoo on my left side I couldn’t feel at all. The most painful part of the entire process was removing the stickers prior to putting on the ink. Ouch, they really stuck after all that time! The tattoos are small, barely the size of a large freckle. Afterwards, my appointments were made for the next 6 weeks, I was advised what to do at check-in each day and reminded about not exposing the radiated skin to the sun.

The next 6 weeks will be another new and necessary part of this journey. Despite what it brings, I will rely on Jacob’s roar to keep me strong. After all, if he believes that I have the strength of a lion then it must be true.