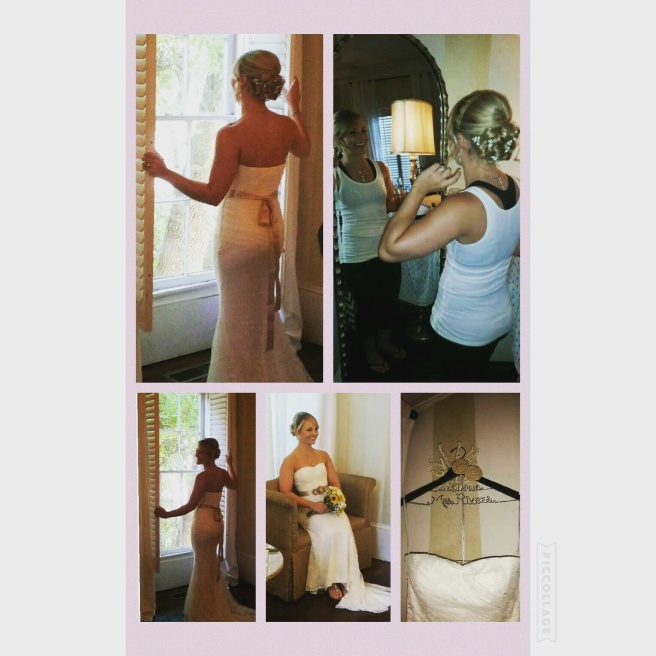 My baby sister and her (now) husband have spent the last 2 years planning their wedding day. They visited venues and hotels, met with vendors and spent a lot of time on Etsy and Pinterest. There were points of frustration along the way, as with most things, and lots of late nights spent preparing all of the little surprises they planned for their guests.

There was a big party to celebrate each of them and a day spent showering them with love. There were tears of happiness, lots of hugs and tons of pictures along the way.
And then the day arrived. It started early, with a workout and coffee. Following that was girl time getting hair and makeup done while he shared a meal with the guys. Soon, it was time to head to the hall and dress for pictures. There was the clink of champagne, the sound of genuine laughter and the carefulness of handling the dress.

Pictures began, first with the girls and then with the guys. Then the big reveal…the moment the groom saw his bride for the first time. There were tears and hugs and love.

The ceremony was filled with friends and family, all there to celebrate the love that these two share. There were more tears and laughter…and at the end, there was a new Mr & Mrs.  Pictures continued for a bit and then it was time to mingle.

The food was delicious, the hall was beautiful and the dancing was epic. The best part of the night though, was not the wine, or the yummy cake, or even the adorable kids boogying across the dance floor.  It was the look on Kate & Kelly’s faces throughout the evening. The pure joy and love that they share amongst each other is palpable. The world is a better place with them together in it.

To my baby sister and her husband, may you live a long, fun, adventurous life together as husband and wife.