During swimming lessons this summer, my son had a few days in the water where he kept grabbing his hair as it floated around his little head. Little man doesn’t have a whole lot of hair but he had some growing in around that time. The instructor told us that he was grabbing at it because the sensation felt new – and odd – on his head. This is how I felt last night. The air on my head, rubbing my hands through over it and leaning it against the pillow were strange, new experiences. It was a little weird and a lot different. Mostly though, it was a relief. I don’t have to worry about when it will all fall out – because it is all gone.

Today in the shower I stared at the shampoo bottle, not really sure what to do. It seemed silly to lather my head but bar soap didn’t seem like the best option either. I opted for a loofah and body soap – which came as part of an incredibly thoughtful gift from the wonderful teachers at my son’s daycare! I lathered up the loofah and then I lathered up my head. I’m not going to lie, it felt amazing. You know when you go for a haircut and the hairdresser massages your head while the shampoo settles into your hair? It felt slightly more awesome than that.

I hope to master some pretty cool ways to wrap a scarf on my head in the coming weeks and I know I will get good use out of my wigs. I also have some cool pre-tied scarves and fashionable hats already, thanks to some amazing friends and family. I spent the evening and today bald though. I want to get used to the feeling and seeing myself without hair. Who’s ready for some pictures?! 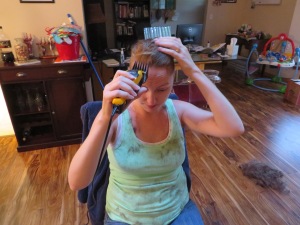 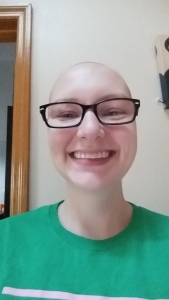 One thought on “And then she was bald”